Meyers Springs Ranch-9700 acres History is sometimes an ephemeral concept, expressed in stories and songs, but not always something we can connect with in a physical, tactile way. The Meyers Spring Ranch in Terrell County, Texas, is the exception. This plus-or-minus 9,700-acre ranch has history on display. Walking among the real historical artifacts on Meyers Spring is an experience you won't soon forget. And in addition to these unique ancient sites, the ranch offers the very best of west Texas hunting and recreation, packaged along with quality improvements and excellent ranch infrastructure. Located approximately 45minutes south of Interstate 10 the ranch is accessed at the end of an all-weather county road through a gated entry. The Meyers Springs ranch is made up of two major sections: an 7,800 acre main parcel and a 2,000 acre game pasture. A good system of well-maintained roads provides access to all corners of this ranch. This area of Texas is characterized by sweeping panoramic views, a healthy variety of native brush, and excellent habitat for a variety of native and exotic game. The ranch has been managed for trophy deer, and the wildlife includes whitetail deer, mule deer, gemsbok, turkey, quail, dove, and the occasional black bear. But the real prize of this one-of-a-kind ranch are the unbelievable historical remnants of Native American Indians that inhabited this ranch for thousands of years. They left their metaphorical footprints all over the ranch -- most prominently in the form of incredibly well-preserved pictographs found on a bluff near Meyers Spring. These paintings have been studied extensively by archaeologists and historians from around the country, and the scenes are thought to tell the stories of their time, including images of European contact. The pictographs have been protected by the overhanging bluff, keeping them bright and prominent on these walls. Since water is such a valuable resource in this area, the ranch was also home to an outpost for black Seminole soldiers in the 1870s and 1880s. Massive amounts of water pour out of the walls into a man-made reservoir that contains thousands of gallons of spring water, as well as a variety of fish. A cornerstone of the dam is etched with the year of construction -- 1901 -- constructed by Lt. John Bullis, a hero of the Civil War who eventually commanded soldiers in this area of west Texas. This site is listed in the National Register of Historic Places, and a plaque has been erected as a monument to that distinction. The canyon and spring are named for one of the soldiers that served under Lt. Bullis. The black Seminole scouts were known as the Black Watch, and they built a small fort near the spring, consisting of fifteen one-room adobe huts and two stone houses, one of which has been painstakingly restored to its original form. More modern improvements are located near the headquarters, including a high-quality manufactured home with three bedrooms and two bathrooms. This home is perched on a high point with incredible views in every direction. In addition, a large barn stores implements and ranch gear. Nearby, two more bunk houses and a game cleaning station have been constructed. For easy access to the ranch, a hangar and two airstrips are positioned so that takeoffs and landings are possible no matter the wind direction. The main runway is 3,500 feet in length, long enough to support even larger aircraft. Ranch infrastructure includes eight water wells, 13 earthen tanks, 17 hunting blinds, and remote video monitoring systems for the deer feeders. This amazing property has so much to offer that it must be seen in person to be truly appreciated. Contact Duperier Texas Land Man for more information about Meyers Spring Ranch -- one of the most historic pieces of private land in west Texas. With agreeable terms. Seller would consider owner financing. 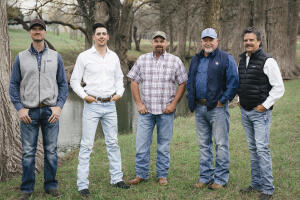